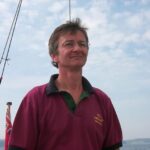 Born in Cornwall, England, I attended numerous boarding schools in England, Wales and Scotland, during which time I developed a respectable dislike of authority and often formulated escape plans, some of which actually worked. Coming from a naval family, I was introduced to the sea very early on and enjoyed many years of cross channel sailing with my father, himself a captain in the Royal Navy. I later bought a beautiful wooden yacht which I sailed from Milford Haven, Wales to Benicarlo, Spain.

I now live in Buenos Aires, where I lived in the mid-1970s for two years. I experienced the 1976 military coup d’état first hand and learned to ride horses with gauchos, which is when I discovered that I enjoyed writing.

In 2005, I returned  for the first time in 35 years and realised that I had changed more than the country had. Three years later, big changes came to Argentina and half way through the recent twelve year Peronist regime, an idea began to form in my mind.

How would I run the country, should I be elected president? That question set me on the path of creating characters from Argentina’s early 19th century dealings with the British, so in April 2016, I started writing The Last British President.

When I’m not writing, real life bites, so to make a living, I build high-end gaming computers, run a motorcycle courier business and write online.

My escape is to ride my motorcycle to distant parts of Argentina, trying not to overthink the country. I don’t always succeed in the latter, but the journey is always fascinating.